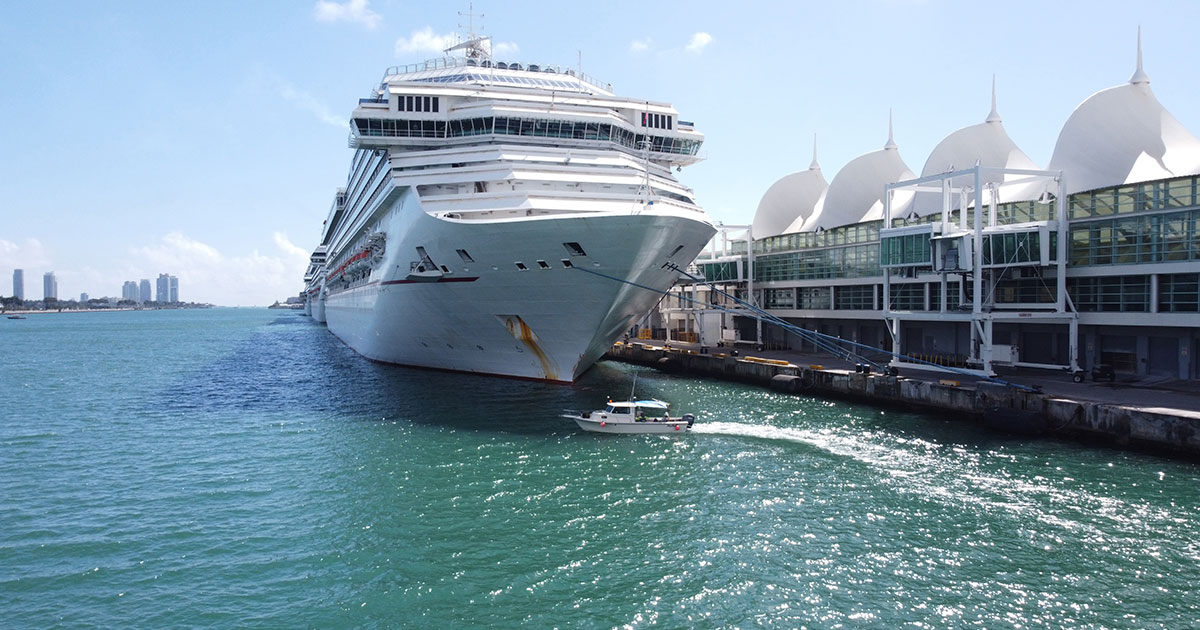 Marine Survey at the High Port

The CDC recently suggested that cruise ships could be welcoming guests back to the high seas as soon as July, after releasing a new phase of the Framework for Conditional Sailing Order on April 2, 2021. The cruise industry has been one of the hardest hit by the global pandemic, so some sort of return to normalcy—albeit with the requirement of facemasks and assurances that 95 percent of the passengers and 98 percent of the crew have to be fully vaccinated—will come as timely relief to anchored companies like Norwegian and Royal Caribbean.

This news has been equally well received by port authorities around the world as they prospect a more prosperous Q3/Q4. Major thoroughfares, normally awash with seafaring tourists, have acted as deadlocked marinas to berthed ocean liners since early 2020.

Despite this period of relative tourist inactivity, there is one important aspect of port life that has sailed on regardless—the business of marine survey.

Surveying a port differs from traditional coastal marine surveying. With the latter, hydrographic surveying techniques are used to collect information relating to the seafloor. Surveying in and around ports, however, is unique because of the dominant presence of manmade infrastructure. Therefore, rather than trying to capture the data points of the naturally occurring marine environment, the objective is to capture data specific to vertical features—such as, large pilings, vertical sheet pile walls, bulkheads, etc.

Seawall inspection is particularly critical to the safe navigation of waters in and around a port. The data collected assists port engineers in the identification of structural anomalies, deficiencies, or routine maintenance. Port authorities utilize this information to plan for future improvements or expansions.

In general, there is a lack of long-term trend data when it comes to trying to model the validity of certain seawall designs and the composite materials used in construction. What we do know, though, is that different water qualities and local environmental conditions play a critical role in determining their durability and performance.

This degree of marine environmental scrutiny is particularly relevant right now to major harbors hosting side-lined cruise ships. This unprecedented period of stagnation is likely to have triggered several associated concerns relating to the port water qualities, such as fluctuations in biofouling rates, and the impacts that any significant shifts could have on submerged infrastructure. Seawall inspection, as part of any regular port marine survey, enables expert service providers like M&E to provide customers with the forensic details needed to take executive action and safeguard against any unforeseen challenges in the future.

We also know that certain ports, such as those up and down the eastern seaboard, are routinely subject to location-specific environmental forces—including major events like hurricanes and storm surges—during certain months of the year. This makes local knowledge, as well as access to any historical data, ever more critical.

Thorough seawall inspections encompass any number of different survey methods, including the collection of borings, topside visual inspections, diver deployment, underwater photography, the use of ROVs, and high-resolution sonar imaging.

However, port waters are notoriously dangerous, so the preference is always to deploy technology that keeps people out of harm’s way. With safety being our paramount concern, at M&E we increasingly deploy our growing fleet of ASVs to run the actual survey lines and use the latest high-resolution sonar systems to capture 3D imaging of submerged structures. Newer systems with wide-angle arrays (upwards of 200 degrees) allow data to be collected from the surface down to the seafloor. Consider the ASV’s LiDAR and you are now collecting a 360-degree point cloud of a port.

These high-resolution 3D images allow us to qualify and quantify any notable alterations between surveys—such as scouring at the base of the seawall—by comparing the point cloud data to historical data. These datasets are then used to construct 3D models of the port to help operators consider any possible redesigns or potential upgrades. This is particularly relevant to any future dredging requirements, as data from the adjacent seafloor along the berth lets port engineers know if there is adequate clearance for the large draft ships to dock safely.

M&E regularly performs multibeam surveys of this nature in and around ports and harbors in Florida and beyond. With over 36 years of in-field experience and historical data compiled, we have been contracted to collect regularly scheduled clearance surveys, ensuring proper depths are maintained in the shipping lanes and at the berths. Additionally, M&E performs surveys supporting deepening and maintenance dredging projects around the port berths and turning basins.