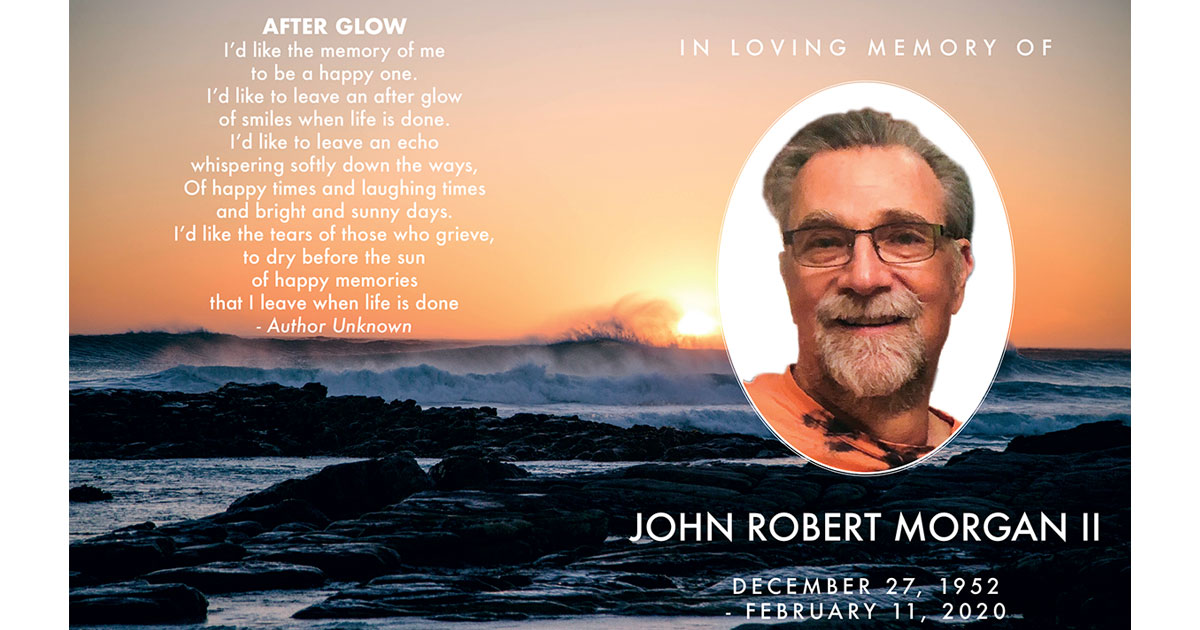 John Morgan, President of Morgan & Eklund (M&E), passed away suddenly and unexpectedly on the morning of February 11, 2020. John was broadly recognized and admired as a hydrographic surveying expert, who supported FSBPA for his entire 42-year career in Florida. Beyond John’s family, John had many friends and colleagues throughout Florida’s professional coastal community. Those relationships were established over his professional career that began in 1978 and that focused on survey support of beach restoration.

John was born and raised in Tunkhannock, Pennsylvania, a mountainous region in northeast Pennsylvania. John’s mother was a nurse, and his father was the local District Attorney, who aspired for John to also become an attorney. John had different ideas; in 1974, John earned a B.A. in Environmental Science from the University of Virginia, where John was an active and enthusiastic member of the Phi Sigma Kappa fraternity. John subsequently studied Survey Technology at Penn State, which led him to perform beach surveys on Cape Hatteras, where John started surfing and enhanced his passion for beaches.

In 1978, John began his Florida career at A.V. Strock & Associates (AVS), one of the first coastal engineering firms in Florida. John headed the hydrographic survey arm of AVS; he led AVS from surveying by “rod, chain, and level” to use of state-of-the-art dynamic positioning developed by Trimble employing GPS technology. In 1985, John, with Ron Eklund and David Coggin, established their own firm, Morgan & Eklund. Inc. In 2017, M&E was acquired by Continental Shelf Associates (CSA), where John continued to lead survey services and expanded the business to include geophysical, oceanographic and metocean survey services. Over the many years of his career, John worked for a broad range of clients including the U. S. Army Corps of Engineers, the Florida Department of Environmental Protection, coastal engineering firms, water management districts, and dredging contractors in support of beach projects in Miami-Dade, Broward, Palm Beach, Martin, St. Lucie, Indian River, Brevard, Volusia, St. Johns, Okaloosa, Collier, Sarasota and Lee counties.

John trained and developed the careers of numerous people in the coastal and hydrographic surveying world including those at CSA and at many other firms. John was quick to share his professional experience to the benefit of others. Beyond John’s professional contributions, every encounter with him was an uplifting experience. John ceaselessly evoked a positive, engaging and contagious energy. John’s sense of humor, readiness to “yuk-it-up”, and make everyone comfortable around him will be sorely missed.