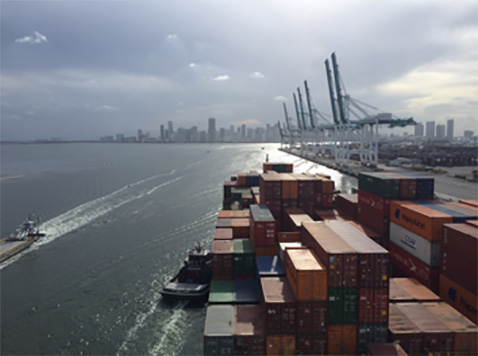 After the most recent deepening of the Panama Canal, container ships have become bigger and wider, with greater capacity—requiring a deeper entrance channel. Additionally, large ships are affected by a phenomenon known as “squat,” where a vessel moving quickly through shallow water has a decrease in under-keel clearance due to low pressure created under the ship by water being restricted from flowing under the ship’s keel (per Bernoulli’s Law). For larger, wider ships, squat can vary from 2 to 5 feet based on channel restrictions, speed, trim, and hull design.

Morgan & Eklund, Inc. (M&E) was contracted by PortMiami (in conjunction with Baird Engineering, Inc.) to set up three RTK/GPS receivers on board cargo ships entering the port and measure the horizontal position and elevation of the bow, the port bridge wing, and the starboard bridge wing. Simultaneously M&E was to determine the reduction in under-keel clearance for a broad range of ship sizes, speeds, and loads. M&E subcontracted CSA Ocean Sciences Inc. (CSA) to provide additional technical personnel and equipment to support around-the-clock operations. Ultimately, ship pilots want to establish safe under-keel clearances for all ships entering PortMiami and prevent future groundings.